Seamatica Aerospace and LOOKNorth are pleased to announce another successful innovation for remotely piloted aircraft systems (RPAS). Since July 2019, Seamatica and LOOKNorth have collaborated to develop a Detect and Avoid (DAA) system for autonomous aircraft. This development was part of the Integrated Remote Sensing for the Canadian Arctic (IRSCA) project by C-CORE with Boeing Phantom Works. The IRSCA project supports the international Integrated Remote Sensing for the Arctic (IRSA) systems of systems initiative with satellite ground systems, modelling and simulation analysis, and advanced geospatial analytics. 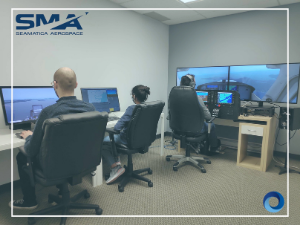 RPAS and optionally piloted aircraft are not capable of pilot interaction to detect and avoid potential collisions. In the Arctic where communications with ground control may be limited, pilot to pilot communications form the majority of DAA maneuvers. This project developed a prototype expert system to address this gap, and potentially support RPAS operations in southern National Air Space restricted areas.

The expert system is named ‘Phyllis’, in recognition of the first female pilot in Newfoundland. Phyllis is an expert system that utilizes artificial intelligence to understand its own situational awareness around the RPAS via sensor and voice inputs, determine potential conflicts with other aircraft, and communicate by voice with ground control or the piloted aircraft to take coordinated/evasive maneuvers. Phyllis is implemented as a software plugin to Boeing’s COMC2-GE (Common Open Mission Management Command and Control – Global Edition) system.

“This project has added to Seamatica’s Detect and Avoid (DAA) solutions for both piloted and remotely piloted aircraft,” says Seamatica’s CTO Siu O’Young. “By working with C-CORE and Boeing, we have built an experimental voice command module that could make the sky safer for humans and robots.”

Phyllis is currently implemented in a simulator at C-CORE and at Seamatica to demonstrate its current capabilities.

Seamatica Aerospace is a dynamic and rapidly growing company that was founded in 2012 in St. John’s, NL. It specializes in technology used for safe air travel and remotely piloted aircraft systems such as RPAS, drones and  UAVs. Seamatica also produces the GuardianEye airspace awareness system that combines radar, Mode C/S and ADS-B sensors to provide RPAS operators with a Detect and Avoid (DAA) capability.